This film happened because the film that the director and I were meant to be shooting was postponed until January and we were both at a loose end so we decided to shoot a script that we¹d talked about during our last film together. A very low budget thriller/horror.

We agreed that I would use as much new technology as possible making this a test bed for future work that we couldn¹t take a chance on.

The first decision was to use the Canon C300-2 with stills lenses and autofocus, we then decided that everything should be wireless and that we would use only LED¹s as much as we could, finally we would use an ACES workflow. 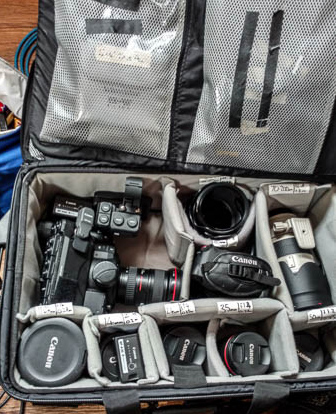 This all fitted into a single LowePro rolling case, complete with batteries and filters. 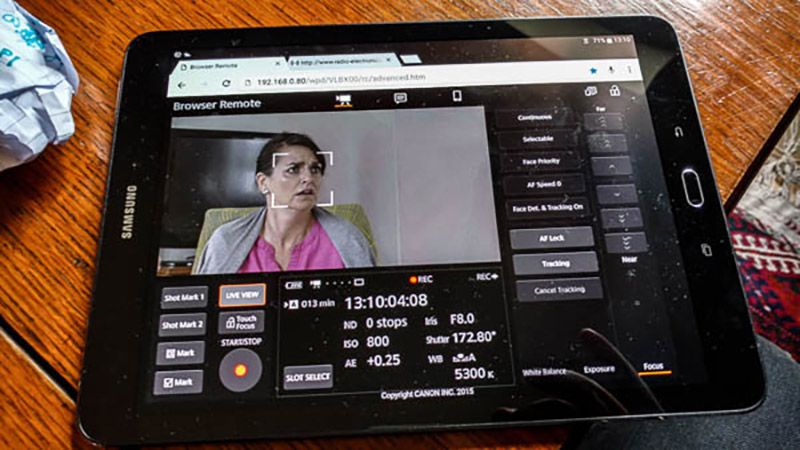 This was controlled with a Samsung tablet, all camera settings and focus would be using this tablet. I also used a Motorola Pure/Style Smartphone and an iPad for variety!

We had a pre-shoot green screen day on the Saturday before we were due to start for real on the Monday and we had horrendous wireless interference problems. The Ronin rig crashed the C300-2 controls, the Bolt 600 crashed everything. It was a nightmare but by Monday morning we had read all the manuals and everything we could about wireless interference that we could find on the net and were ready to go.

We had to change the C300-2 from 2.4GHz to 5GHz and that solved the clash with the Ronin, it didn¹t solve the clash with the Bolt but disabling frequencies below 5.5GHz on the Bolt fixed that, we were lucky that the radio mics were in a band between ours.

Everything then worked reliably until we moved to a part of the location that we hadn¹t been in before and all hell let loose, using apps (WiFi analytics from NetGear) that scanned for frequency use we found that the location had all kinds of relay routers clashing with everything we were using.

Brute force and ignorance ruled and we unplugged the nearest ones and solved the issue.

The location we were in had incredibly thick walls, it was an old stately home, and this meant that sometimes I would lose camera control but the Bolt just blasted through everything!!

The only other issue was when our sound recordist decide to monitor from a long way away and to use a video sender for his video monitor. Once I had broken this into little pieces we had no further problems.

So, did autofocus work? Most of the time, it was a learning experience, we realised pretty quickly that we would send commands and that they would work but the feedback saying they had worked took a while. This meant a number of false starts as we pressed record several times thinking that nothing was happening. A quick solution to this was to have a 7² monitor next to the tablet that was receiving the output of the Bolt, as this was the V/F with all the usual info we could tell if things were working on time. When possible I made sure that I could see the 17" floor monitor for a better view. 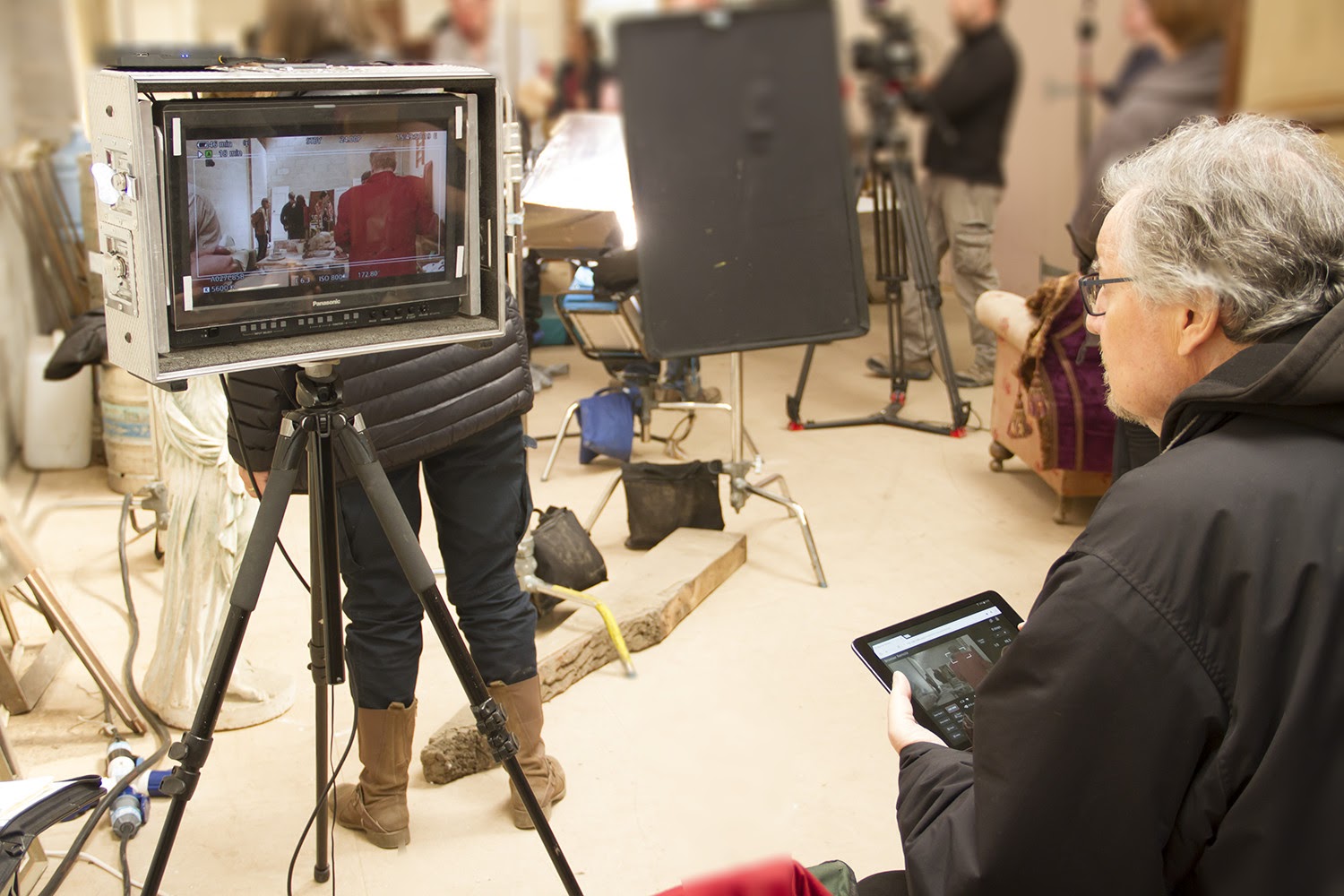 The only time you could pretty much guarantee a focus problem was in low light and low contrast conditions, otherwise it worked really well, we had to learn when to use face tracking and when to just point and click. Focus lock was essential as well. As a number of our cast had facial prosthetics the face recognition did have some problems. That by the way is a huge understatement! but I guess people with pig noses just don't look like people. On that subject it's interesting who the focus would prioritise on when in facial recognition mode. Mica our young actress was the favourite, whenever she was in shot the system would favour her. Obviously the person who programmed the system likes young blondes...

I also found that the best way to set exposure in some locations where light was varying wildly, Yorkshire summer!, was to keep a meter next to me to take incident readings and then remotely set the stop. 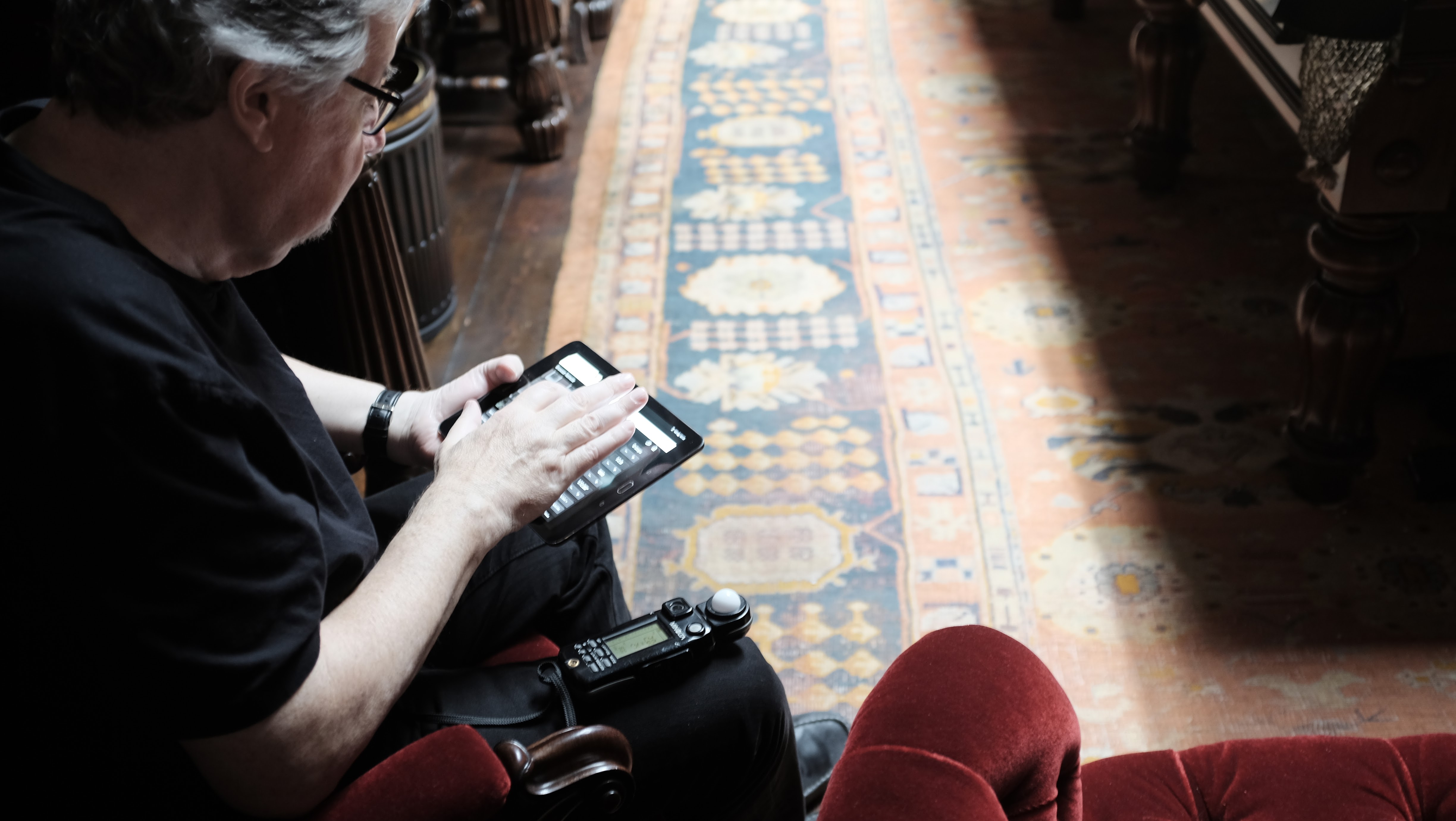 Overall I think the focus was a success and enabled us to work a lot faster than we would have been able to otherwise.

We also tried using a second iPad to allow our script supervisor to add notes to the metadata, this worked but she went back to paper, if we had had stylus input available then she would have stuck at it!

A simple mod I'd like is a 2 channel access to the camera functions so that the AC and DP can work on different sections of the menu and controls.

Having the Bolt 600 loaded with a LUT that emulated a pre-grade in ACES was amazing, it changed the way I lit.

And that brings us to the lights, apart from 2 * 2.5Kw HMI¹s all my lights were LED, a mixture of Aladdin's, BBS, Kino & Stella, I had intended to use my Fill-Lite but it was just too big for our locations!! 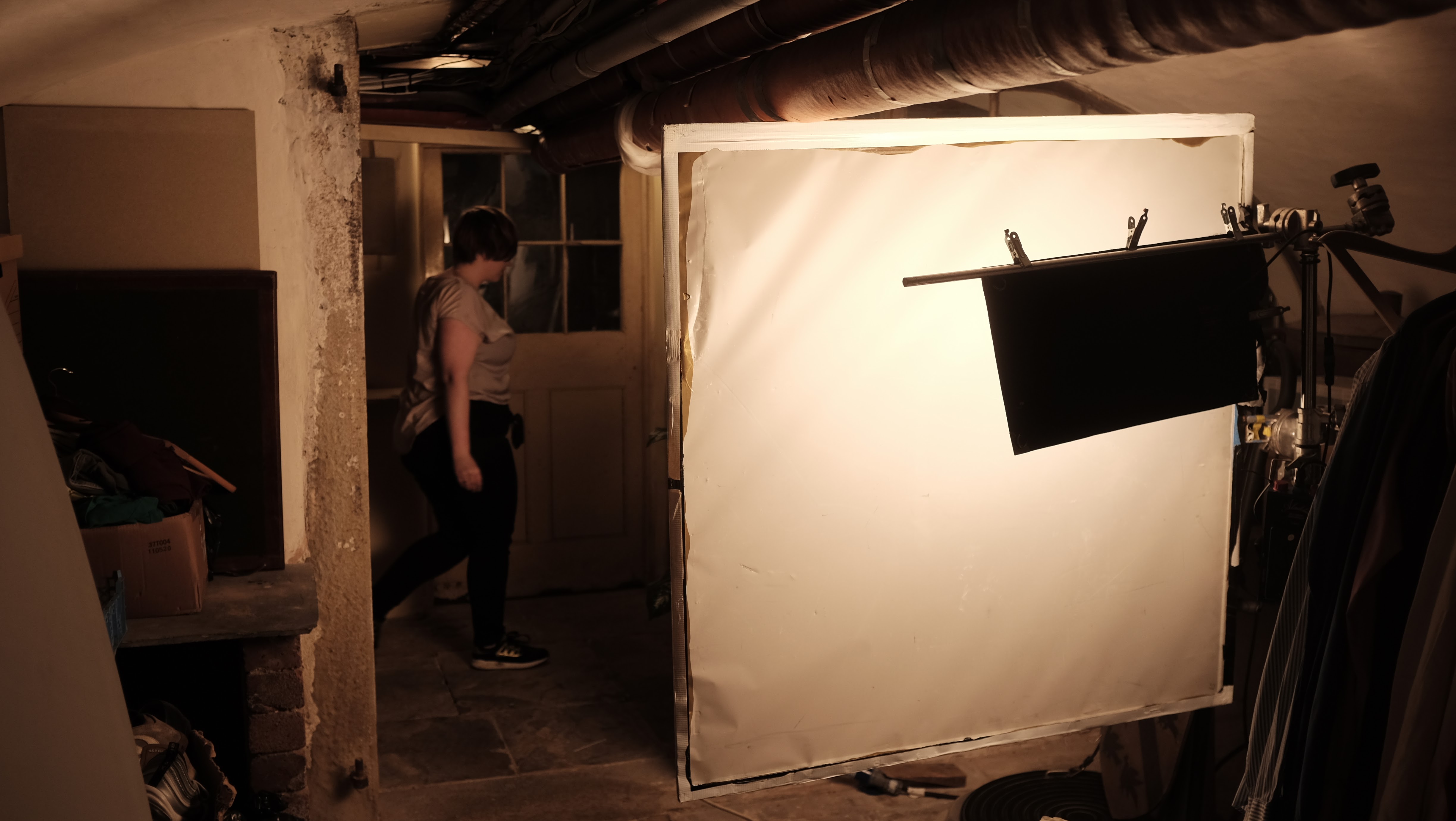 The Stella was probably the hit of the show with its built in battery lasting around 90 minutes at full level and in reality it was normally used at around 30% which gave us 4 hours! The tiny Aladdin's were quickly stuck in all kinds of places as well as being thrown into chandeliers to reinforce the output!! All batteries. 12" Pipelines were used to kick a bit of fill in all over the place, like everything else they were mainly battery powered.

I also used a prototype DoP snapgrid on the 4*4 frames, it was their normal eggcrate but with an interchangeable centre section which allowed a tighter or looser lighting feel to the centre of the area, I often used the centre clear. 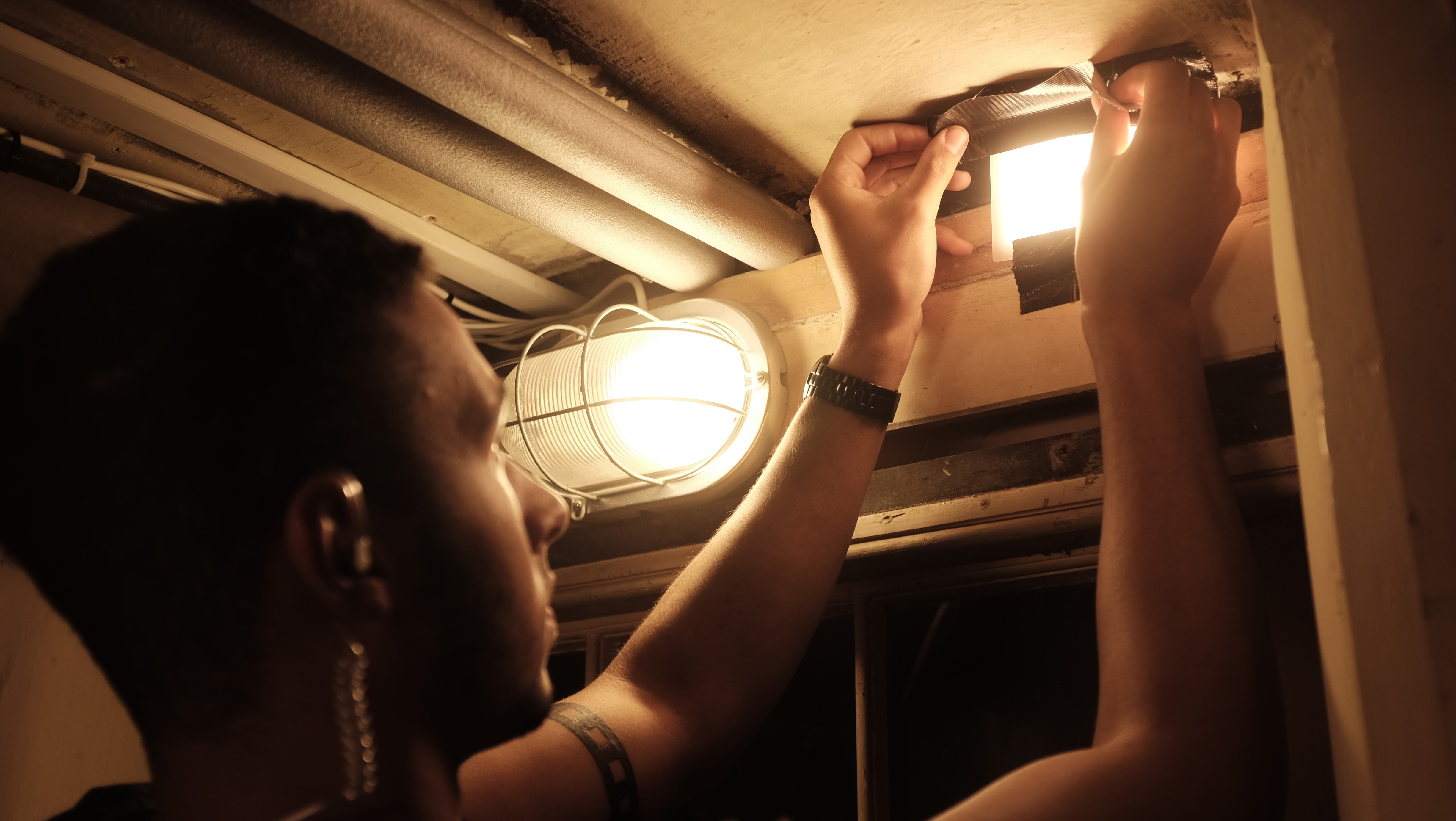 I can¹t emphasise too much the speed that battery power lighting gave us, an old house with limited and dodgy power. 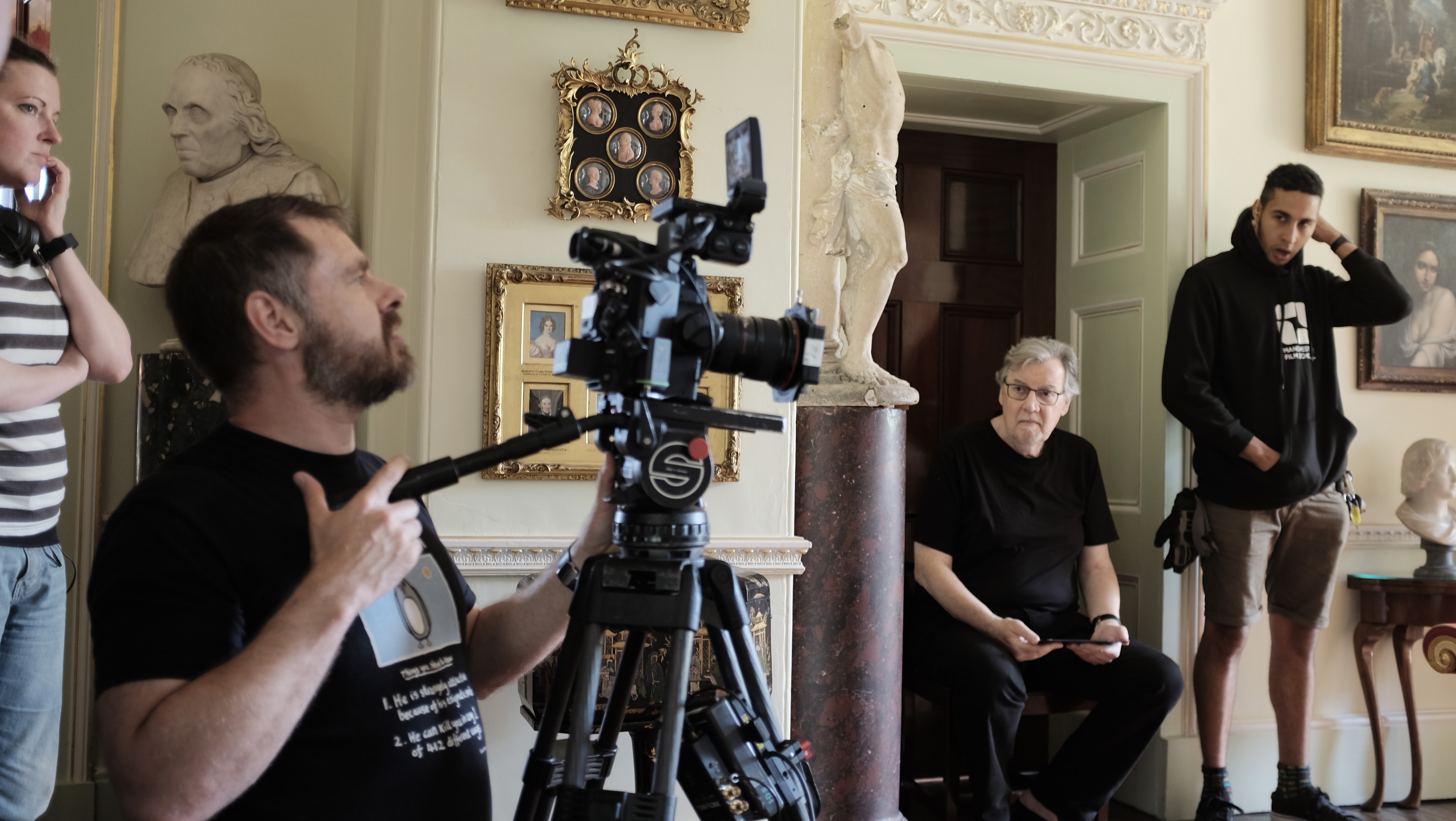 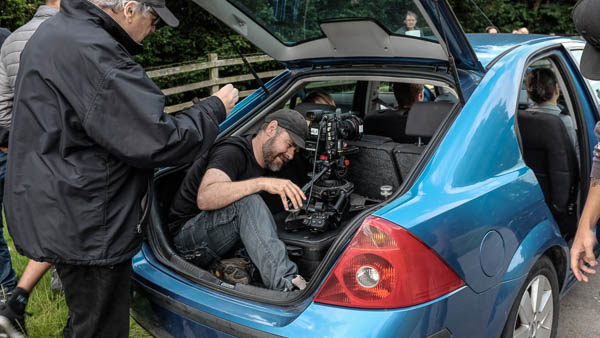 The tiny camera and lens meant that we could squeeze Gregg into some very small places... 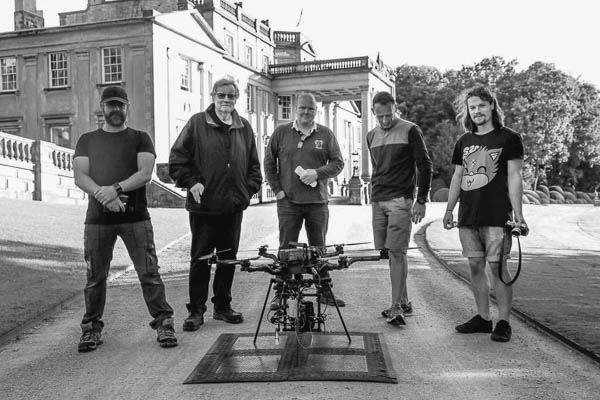 Director Dominic Brunt in centre and 3 generations of my AC's! Gregg Smith now operating, Jason Bulley, a great DP in his own right now, visited us with his drone for an aerial shot and Jack Hayter our AC. A weird grandfather feeling came over me!

I've had a chance to look at most of the material now and I am definitely a convert to autofocus, even if this had been a much bigger budget shoot I'd have been tempted to use it, no, I would have used it and I certainly will in the future.

There is a learning process to go through, face tracking, object tracking, poke the screen tracking, a combination of all, focus lock, when not to use focus lock.

Some lenses are faster than others, this would be my main objection, you can lose focus on objects moving rapidly towards you.

I'd like a few preset focus points added to the software so that you could rapidly tap between key places.

Update...Canon have added 2 preset points on the latest update