These comments and pictures were shot in the extreme cold in Hemevan inside the arctic circle in Northern Sweden...

OK, yesterday was our second day shooting here and the temperature dropped to minus 30 centigrade at one point in the morning.

It's been interesting the love/hate relationship that has been developing with these cameras.

The F3's which have been in a Mirror rig and SbS have worked faultlessly and the 3D link has been a boon.

The GoPros got the electronic jitters at one point switching record modes at random, an effect of the cold but they worked well nearly all the time,
it was just after a fast ski session where they had been exposed to serious wind chill factors where they went a little dodgy.

">
They started to switch back and forth between moving pictures and stills at random.

The NXCam, this is the camera that most people have loved, we came away with incredible footage shot from ski to ski, just amazing stuff.
The way that we've ended up using it is before we shoot a section we set up what we would consider the "ideal" framing for a shot and hit the auto align button until we get a valid indication.

Of course because of the location and size of this button we have to take our gloves off and in my case even with my gloves off only my little finger will fit in there. 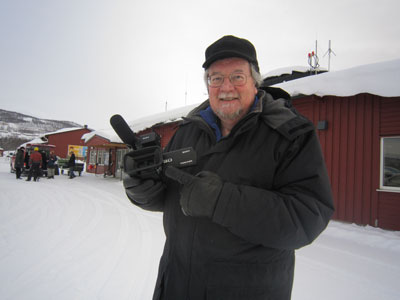 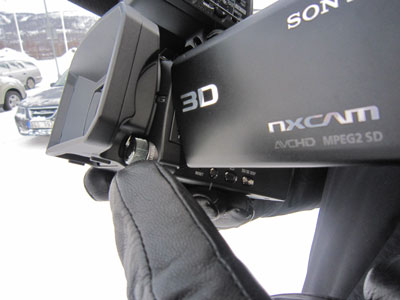 I will not repeat what the designers of this have been called but I don't think we missed any obscenity in either Swedish or English!
As for adjusting anything manually, well it's just not possible in a real shooting situation.

TD300, this has been an eye-opener, I expected to loath and detest the fixed IA, and I expect that the material we will be shooting today will cause it problems, but for all the mountain climbing and skiing yesterday it produced great pictures.

The big problem is once again the controls, is every one who tests/designs these cameras a midget?
Is there a policy at Sony of giving midgets a break in employment and putting them all in the design and testing section?

The main camera body is standard Sony Camcorder and hasn't really changed since 1984 when they brought out the BVW200, it all works.
The assignable buttons are just too bloody small again but assignable 2 is a sliding switch and is just wonderful for locking convergence, and you really need to do this! You will also need to shoot with auto iris, I know, I hate this as well but if you shoot manual with a momentary press occasionally you will be screwed because there is a secondary iris control on the underneath of the lens system.

It rubs on camera covers, thighs, fat fingers working on the rest of the controls, it's 'king nightmare.
I asked the guys to either prize it off or super glue it but they compromised and taped it fixed.

The V/F select button, which you will need to use a lot because you need to use it to set on picture for setting convergence, which works well, we used a number of options here but the red and blue indicators for exceeding preset disparities worked really well.

Our fast fix for convergence was to make sure that we had the tiniest blue wiggle in the far background and let everything else look after itself.
Not ideal but ti's worked pretty well. Of course you can't see focus in any of the V/F convergence modes so you have to rapidly flick it to L only.
Of course the button was designed by/for midgets in a nice warm office and ...
Now that "great idea" the triple knob for convergence, zoom and focus,
I want to meet the guy who thought of this and rip his arm off and beat him to death with the bloody stump.

In fact I may kill him by throwing the midget control designers at him! I want to focus, no, I've zoomed, I want to focus, no, I've changed the convergence.
OK we assigned convergence lock to the sliding button 2 and after that we only screwed up the zoom, why can't I choose to switch the rotary zoom control off?
I'm not going to go on and on because I think you've got the idea by now.

The pictures, just in case you're interested, are great, I'll be using this camera a lot more in the future.

If I owned one I'd be opening it up and disabling all kinds of "clever" ideas.

I'll post about the problems of working with so many different highly compressed formats later.

So in summary, the pictures from the NXCam and the TD300 are really good
and we've got 3D footage that we would never have managed any other way
but don't ever let me be in the same room as the designers!!

PS When I bought my first Sony Broadcast cameras, in '78?, BVP300's,
I went to Sony Headquarters in Basingstoke wearing a down jacket and heavy gloves, as this was summer I got some funny looks!

Of course once I put the camera on my shoulder and it turned itself off
because the exposed power switch caught on the down jacket...

They responded really quickly and the camera was released
with a protective surround to prevent this from happening.