We are told again and again that digital acquisition is the way forward, that it’s “better than film” or at least as good.

Is this the truth or is it just PR spin?

I decided that the only way I would be happy was to go ahead and test all the high end digital origin cameras myself. This proved to be much harder that I expected.

I wanted to do a very simple test, a latitude test. I was going to take the same 2 charts that I use to tests a new film stock and use them in exactly the same way that I do to establish a films latitude.

A Gamma and Density chart with a Macbeth chart alongside it, these would be exposed from 7 stops under to 7 stops over at half stop intervals. This would clearly show where the highlights clipped and where the blacks lost detail.

All the tests were done in exactly the same way, the 2 charts lit first to T22 with the cameras rated at 320 ISO, the lens was then opened at half stop intervals until we got to T2. The charts were then re-lit to T2 and the exposure decreased in half stop increments until we got to T22. Large chip cameras, Arri and Dalsa, had the 100mm Zeiss Ultra Prime and the smaller chip cameras, F950 and Viper, had the 40mm Zeiss DigiPrime lenses.

All the cameras were in “standard” mode, as you would get them from a rental house without any modifications to the camera response.

We wanted to include the Panavision Genesis but Panavision wouldn't play, they didn't provide Disney with a camera for their tests either.

Click on the links below to see the results.

>Tim Sassoon then sent me his tests of the Canon HDV

Dalsa Origin - Because the Origin captures RAW Bayer data DALSA had to do the Bayer to RGB processing for me. After processing, the images are mapped to the display media so DALSA provided both mapped-to-key and unmapped sequences to save me some time, I'm only showing the lower res (1920)mapped images.This link will take you to the Dalsa site which has all the full rez mapped & unmapped images.

Sony F950 - I know that I could have got a better highlight response by tweaking this camera but this is what the manufacturer considers to be "normal" if they don't set normal to be the optimum performance then please don't blame me!

GVG Viper - Again, we could have got better results by adding magenta CC filters to these tests but again that's not how the manufacturer sees "normal"

Whilst at Idiff in Cannes I thought I'd test the Panavision Genesis, the camera was there, I was there, my charts were there but so were several people from Panavision who threw themselves between the camera and me waving fingers and repeatedly saying NON! 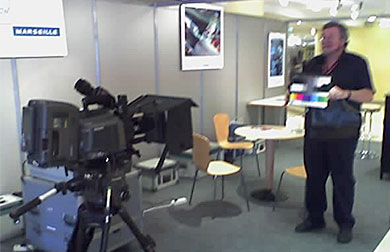 Photo by Steve Roach with my Motorola Razr cell phone!