>This page is from Tom Gleeson & Ben Allan ASC

In late March thanks to Ali Peck from Film support ( Sydney ) I had the opportunity of testing out the new Fuji Eterna 500T stock. This new release was great news as I am a fan of Fuji stocks but since the release of the awesome Kodak ‘18 500T stock the Fuji stock range had developed a ‘high speed tungsten” weak link.

A stable grey balance due to excellent linearity over the entire exposure range.

Excellent skin tones by embodying a balanced interlayer effect in each exposure range.

Increased sharpness by improving colour formation efficency of the dye couplers thereby reducing the thickness of the photsensitive layer.

I am not a fan of just reading marketing blurbs and shooting charts for test purposes so I attempted to find a real world scenario where I also had some room to experiment. Peter Templeman a recent graduate of AFTRS was planning on shooting a “Spec” commercial so we teamed up with Producer Anmaree Bell to shoot “Trough”.

The shoot itself was quite simple with two men in a nightclub toilet conversing at the urinal. Being a no budget job meant gear was limited but AFTRS and Panavision helped out with lenses and some lights. Lighting was down to two 4x4 kinos and a couple of redheads, a blondie and Dedo lights. Perfect for a 500asa test !

Anmaree Bell organised a smooth shoot with a professional and helpful AFTRS crew Peter Templeman got some great performances from Peter Fenton and Robin. Special thanks to Stuart Drayton for pulling focus on short notice.

Our look for the TVC was rich saturated colors in the background but with the faces slightly blown out and cold. As it was comic piece and our resources were limited I took a simple approach. Kinos for a high Key straight down on actors with half CTB and redheads and Dedos with colored gels playing on the background for nightclub ambience. The small interior and the nature of the location meant we really did not stress the stock exposure wise. ( I just love shooting in white tile toilets ) The 500asa speed gave tremendous latitude with the small lighting Kit and we easily ran the camera up to 75fps without running out of stop. The film was rated and processed normally. 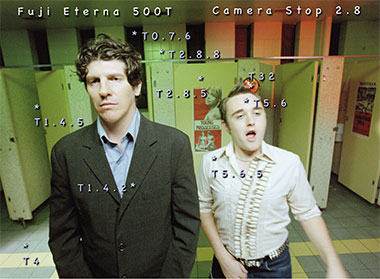 Click on the image of the two boys for a full size frame so you can make your own judgements. It is not the final “ da Vinci ” graded image although the black and white points of the low contrast scan has been mapped to 0 to 255 and a .6 gamma applied when the Cineon frame was converted to a JPEG. I have also annotated exposure values on to the scan for reference. Looking at the scan the rendition of colour and tonal values were as I remember them. I often hear that Fuji stock has a green cast but in my experience on two feature films and a couple of shorts and TVC’s is that this is not the case. Having said that I always tell telecine operators if its Fuji stock as they are usually set up for Kodak. Its worth noting the grading power in modern telecine and now Digital Intermediates can very easily overwhelm subtle stock differences marginalizing the importance of these differences.

On film shoots I find I am using my light meter less and less as the latitude of modern stocks increase. This latitude allows me to simply light scenes to my eye, and be confident that the stock will capture the scene as I see it. The 500asa speed allows smaller more “natural” levels of light. This can allow the photographer to embrace the ambient light if they wish and use lighting instruments to garnish and augment. The penalty for this flexibility used to be grain and sharpness but in 35mm at least this is no longer the case.

Post production was through an unusual path. Leonard Coster at SpeedWedge did a scan at 4K and delivered 2K Cineon log frames. Cutting Edge kindly helped out for the online and took the 2K Cineon files converting them (via Smoke) to High Definition video on HDCam tape and graded through a da Vinci 2K color corrector . We graded the pictures fairly hard in our short time but this is typical of much TVC work. No noise reduction was required as the Super 35 images were visually grainless. Final product was down converted to SD Digi Beta. A torturous path but the 2K scans allow me to share with others a reasonably accurate representation of the negative.

I have also included a collage of Macbeth charts I did with Ben Allan at Lemac one shot with Kodak’s 500T 5218 and then again with Fuji 500T Eterna 8573 with varying exposure values. Look atthis test for an accurate and more scientific measure of the stocks respective responses. The results were a surprise to me.